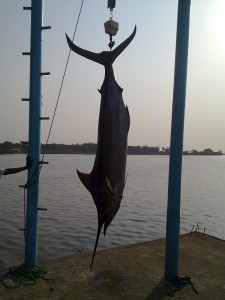 One of the most beautiful fish in Liberia, the Atlantic Blue Marlin are routinely caught off Monrovia’s coastline. Normally staying far out to sea, the sudden deep waters off West Africa bring it closer to the coast than elsewhere.

Fast, fierce, fighters a fully grown Atlantic Blue has only one predator in Liberia: those who fish for sport. It is one of the fairest fights since an adult fish is the same size as adult fisherman. There is no commercial fishing fleet in Liberia to threaten them and only half a dozen boats with the gear and engines needed to find and hook them.

We have the gear and engines: if you have the fight.